So, you’re going on a press trip?  How exciting! For many travel writers, free travel represents the pinnacle of their efforts.

I have one question for you, before you pack your bags.  Have you already sold a story idea or two about the place you’re going, before heading out the door?

Press trips are one of the coveted perquisites of being a travel writer; going to interesting places and tourist attractions, being chauffeured around with other members of the press, eating at some of the best restaurants in town, finding gifts waiting for you in your upscale hotel room – it’s all quite delightful. 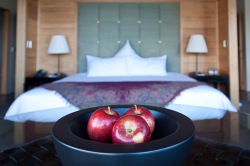 On your first press trip, you’ll probably wonder,  “I’m being treated like royalty. Why are my hosts knocking themselves out to make sure I have a good time?”

It should quickly occur to you (I hope) that you need to do something in return.  You need to repay the favor.

But what exactly do tourist and PR agencies expect of you after you’ve been wined and dined at their expense?

The answer is found in the Roman phrase "quid pro quo", which means “something for something”.  And that sums up exactly what the PR, Media and tourism representatives expect after you’ve toured their region, city, resort, attraction, or cruise.

The unwritten agreement is that you’ll write something about their attractions and get it published in print or online media.  Certainly there is no binding contractual agreement between travel writers and Destination Marketing Organization (DMO) media PRs to produce published articles—but this is their expectation.  This is the meaning behind quid pro quo.

We are ethically obligated to write about the place.  After all, the DMOs have just forked out a lot of money and gone to great pains to arrange your itinerary, guides, accommodation, meals, complimentary entry into tourist attractions, and often much more.

On a 12-day press trip to Southern Germany—courtesy of the German National Tourism Agency—I experienced impeccable hospitality.  There were personal guides waiting for me at each of the ten cities and towns I visited for my assignments.   The German guides, hired by the local tourist agencies, met me at train stations, and drove me to my hotel and got me checked in.

Then, they’d take me on a deluxe tour of their city, dining me and even taking me to the opera.  The next morning we’d finish the tour and my guide—who had by now become a friend—would see me onto the train to my next destination.

The cycle was repeated again, the next day.    In return for this regal treatment, I promised an article about each city I toured, plus additional specialty articles about their military fortifications and museums.

I’m proud to say that, after 90+ press trips and Fam tours, I’ve delivered at least one quality published story—and usually multiple print and online stories—for every one of those press trips.  Quid pro quo.

Some time after my German tour, I experienced similar hospitality in Fairbanks, Alaska while doing assignments for several magazines. For an entire week I had a personal guide who was happy to make side trips to places I needed to visit for my assignments.

We even took a detour to the Barnes & Noble bookstore because I needed to purchase some local reference books.  My quid pro quo for this week-long excursion was five Fairbanks articles, in print media and online.    It’s all quid pro quo.

Ethical writers feel obligated to produce an article—or even better—multiple articles.  The media PRs and tourist agencies bust their chops to host and entertain travel journalists. You owe them an article in return. 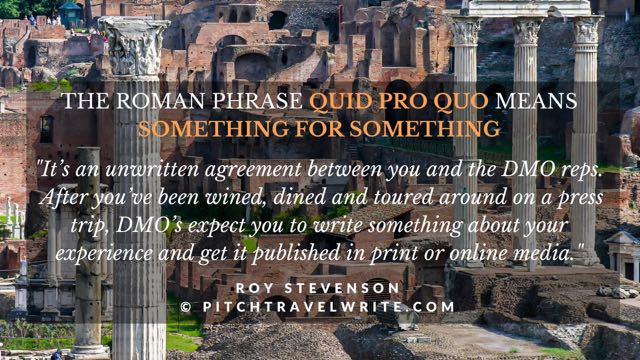 Why am I writing this article?  Sadly, some people pass themselves off as travel writers and abuse the hospitality and trust that is so kindly extended to them.  These wannabes don't understand the concept of "quid pro quo".  They don’t deliver any articles after the trip.  ‘Writers’ pulling this stunt have burned most DMO media reps at one time or another.

Dishonesty by some people who call themselves travel writers ruins things for the majority of professional writers who do produce the promised stories about their destinations.

Many DMO media PR’s become gun shy of travel writers as a result of being burned by fake travel writers.  This bad experience makes them reluctant to host travel writers, or at least makes them suspicious until they know they can trust us to deliver.

It's All About Marketing

There’s one vital concept about travel writing that is often not clear to some writers.  Travel writing is about marketing.  You can resist this concept as much as you like, but in the end, travel writers help the DMO reps sell their destinations to magazine, newspaper, and online readers.

The DMO’s “market” their destination to you when you travel to their region.  And you “market” your story ideas to editors to get your article published.

It's all about marketing.  Failure to understand this will quickly become a barrier to your success.

Remember to Say "Thank You"

A while back I participated in a writer’s forum, where I occasionally find interesting and entertaining articles about the state freelance travel writing.  But I’m still in shock about one of the comments I read.

This particular travel writer said that she only writes about luxury resorts and cruises.  She mentioned that if she doesn’t like a cruise or resort where she is hosted, she refuses to write about it!

To make it worse, she went on to say that when she refuses to write about a trip, she writes to the resort’s media people with a list of things she didn’t like about the place.

This arrogant approach toward her hosts strikes me as being grossly ungrateful.  I also believe this attitude is unprofessional, even mean-spirited.

More importantly, this ‘writer’ has completely missed the point of marketing herself as a travel writer.  Instead of doing her job as a travel writer and writing about the destinations, she acts like a critic.  And she has the audacity to make a big deal about it to the PR people who have hosted her.

Not surprisingly, travel writers with this negative attitude inevitably find themselves receiving fewer and fewer invitations to press trips and Fam tours.

We are not critics!  We’re travel writers.  Get it?

Fortunately, most travel writers prefer to be known for their creative story ideas, writing skills and ability to get published.

This is a good place to repeat my Fam Tour/Press Trip mantra:

We are not in the position to refuse to write an article after we've been hosted at a place.   "Quid pro quo" is part of the game.  Find what is good about a place, go home, write your story and move on.

And, please, don’t have the audacity to massively annoy the media PR’s with your negativity.  Send constructive feedback to the media rep when it’s appropriate, but it’s not our business to complain.  Chances are there were plenty of positive things about the place.  Remember, we're not critics.  We’re travel writers.    A sincere “thank you” is appropriate for everything your media host has done for you.  Even if it wasn't perfect.

Every Place is Perfect Enough

What do you do if you didn’t like some things about your destination?    Look for the good that’s there.  There is good stuff everywhere.  There must have been an outstanding museum, a great meal, or an awesome tour.  Maybe it was just the awesome sunshine in the middle of a dreary winter.

Focus on the good stuff.    You don’t have to write about the things you didn’t like.  Better yet, be creative.  Turn the negative stuff into something good.

A while back I read an article about Sedona written by Laurie Gough.  If you’ve been to Sedona, you’re familiar with all the mysticism that surrounds the place.  So Laurie Gough wondered if the whole town of Sedona was built on a hoax.  She was skeptical about the mystical claims made about the several vortex sites in Sedona.

She did her research and encountered a lot of spiritual hype.  Then she trekked all over Sedona looking for the spiritual vibe.  As you might imagine, it wasn’t forthcoming.   The basis of her story was built on frustration and cynicism.  But she didn't leave it at that.  If she had, the readers would have ended up feeling negative about all of Sedona.

What did she do?  She resolved it into something to leave the reader with a good feeling about this beautiful place.  (I won’t ruin the punch line for you, but if I’ve tweaked your interest, you can read her story at this link.)

Laurie's technique is a good example of how to handle a situation when you’re faced with negativity and want to turn it into something positive. 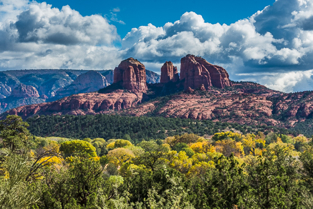 Several years ago my wife and I sat down for a meal in a restaurant in Monaco.  Before long, there were people smoking all around us.  This was typical throughout most of Europe at that time.

I asked the waiter if we could change tables, to a different part of the restaurant without smoke.  He accommodated us as well as he could, but casually mentioned that, “If we didn’t want smoke around us while we eat, maybe we should just stay home.”

Harsh?  Yes, but after we got over our embarrassment we had to admit he had a point.  We were in Europe and everyone smoked in restaurants in Europe back then.  That’s the way it was.

Expecting the world to conform to your lofty expectations when you’re at a new destination is certain to invite extreme disappointment in the travel writing game.

The point of travel is to experience the place as it is – not to make it into something you want it to be.  Otherwise, as our wise waiter pointed out – maybe we should just stay home.

Explore new places, experience new things, and most of all fulfill your obligations to your hosts.  Share the good stuff about those places with your readers.  Deliver on your part of “quid pro quo” and you’ll get invited on more press trips, find them more rewarding and you’ll feel more successful as a travel writer.

How to Land Press Trips and Fam Tours

I've written a guide about how to land press trips.  It will tell you everything you want to know about how to get into the inner circle and get invited on regional, national and international press trips.