12 Query Letter Mistakes
and How to Fix Them

A query letter can showcase your very best side to an editor.  But if you make query letter mistakes it shows your worst side.  Of course, you don't want to make errors.

A successful query takes your compelling story idea, your solid writing background, and persuasive prose and convinces the editor that you have what it takes to provide an exciting and interesting story for the readers.

Being a few inches off the mark with your query is as bad as missing the target completely.  This is unfortunate, but it’s the way it is.

The editor is either going to like your query enough to run with it, or dismiss it on the spot. There’s no middle ground or consolation prize.

We’ve all read books about what to put in query letters. I have eighteen books on my freelance writer’s bookshelf about the art and science of getting published, and every one of them has a chapter about putting together a query letter.  Three of these books are entirely dedicated to writing query letters. 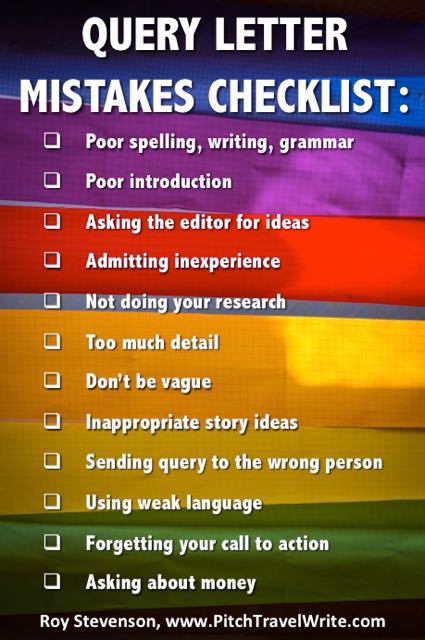 If you’re an experienced freelance writer, a quick review will help to ensure nothing bad has crept into your style.

Doing any of the things on this list will guarantee the editor will hit the “delete” key.

Before you send it out be sure not to make these 12 query letter mistakes:

Most of us would think this would be an obvious no-no. But, amazingly, editors still complain that they see poor spelling, poor writing skills and bad grammar in query letters.

If you want to get anywhere in the freelance writing game, having perfect (or almost perfect) grammar and spelling is an immutable law.  Anything less than perfect writing skills screams “beginner”, to an editor.   Use your spell-check tool religiously.  Take a class if you’re struggling with grammar and writing.

Starting your query letter by introducing yourself and listing your credentials is a bad move, yet also remains a common occurrence.

“Hello, my name is Roger Writer, and I’d like to write about . . . “ is not the way to start your query letter.

Always launch your query with your story idea.

Editors only want to see your credentials after you’ve provided them with a good story idea.

A query letter mistake that will make you look bad:  Asking the Editors for Ideas

Asking the editor to assign you an article is a good way to drive the editor to drink.  You’re the one who’s supposed to come up with the bright story ideas, so put on your thinking cap and dream up some scintillating ideas that will knock the editor’s socks off.

If editors want on off-the-shelf story, they will contact their stable of “regulars” who’ve been writing for them for years.  In the meantime, do some research, read through magazines, and pitch your own great story ideas until you become one of the regulars.

A query letter mistake that screams "NOVICE":  Admitting Your Inexperience

Telling the editor this is your first attempt at getting published, or that you’ve never been published before is a good way to prompt the editor to hit the delete key.  “I’m a complete beginner to travel writing and was hoping you could help me get published by printing my article”, is not a good start to your query letter.

What if you have no clips?

Simply leave your proposal as is, for the editor to review on its own merits. Most editors will give a beginner a chance if the story idea intrigues them enough. They have nothing to lose. They can always refuse the story if you botch it badly.

You’ll also run into some very kind editors who will work with you to re-write the piece, if needed.  When this happens, be open-minded about the feedback.  You can really learn a lot from the experience.

One final note, sometimes writers have previous writing experience in a totally different field.  If this is you, don’t be tempted to send irrelevant clips or links.  The editor doesn’t have the time to translate unrelated experience into what you can do for his/her publication.

A query letter mistake that make you look unprepared:  Not Doing Your Research

There’s a fine line between revealing enough of your story to interest the editor and inundating them with so much trivia that they fall asleep half way through your proposal.

If you haven’t done adequate research on your topic, the editor is certainly not going to do it for you.  If you haven’t done your research, it will show in your query letter.  You will sound like you don’t know anything about the topic.

Make sure you include enough details about your topic to convince the editor that you know what you’re talking about.

Query letter mistake that makes the editor question your abilities:  Too Much Detail or Being Vague

Similarly, providing too much detail is likely to have the editor thinking, “Okay, I get it.  Enough already”.

Provide a few facts and figures as teasers to show that you have done your research, but don’t blind the editor with trivia or with your vast knowledge of a subject.  Tempt the editor into wanting to learn more by assigning you the article.

Beating around the bush about your topic will infuriate many editors.  If you are too vague, the editor will not spend the time trying to figure out exactly what you’re trying to say, and will feel frustrated.

Your story idea needs to be clear and concise so that the editor can immediately understand it and take action.

A closely related querying mistake that many beginners make is pitching inappropriate story ideas.  Read through previous issues of the magazine before you query the editor to make sure it’s a good fit for the publication.   By doing this you’ll get a good idea of what topics the editor prefers for his readers.

I have had experiences that fly in the face of this advice.  Sometimes I’ve sent out my query to several magazines and added a “long shot” magazine to the list.  I pitched a story idea I thought the editor wouldn’t go for, but fired it out anyway.

And guess what?   Several times the editors of those “long shot” magazines have replied that they would love the story.  The ultimate irony is that often the magazine editors that I was sure would go for my story idea didn’t even reply.

So, although you want to focus on a good fit, when in doubt about whether you should query a magazine, my advice is to go ahead and send it.

A big query letter mistake:  Sending Your Query to the Wrong Person

Sending your query to the wrong person is, according to the experts, another big “no-no”.  Take the time to find out the name of the editor, and then address your query letter to this person.

There are always some exceptions.

I’ve sold many stories addressed to “The Editor” when I couldn’t track down the editor’s name.  I believe that if your story idea sounds good, the editor will go for it no matter how you address the letter.

Make your best effort to find the editors name, first.  If you strike out, then use the default, “The Editor”.  (Don’t use “To Whom it May Concern”.)

Some writers have a habit of using modifiers to soften their meaning.  Using words like could, should, might, may, and would dilutes the message.

This phrase is indecisive and indicates a lack of confidence.  Editors look for writers who positively believe their stories will entertain the readers.  Use language that exudes confidence.

The above sentence is better presented as: “This article will interest your writers because . . . .”

Forgetting the Call to Action

Don’t leave out your call to action at the end of the query letter.

The call to action tells the editor what will happen next.  If you want the editor to contact you, your call to action will be something like “please contact me if this article looks like a good fit for your magazine”.   You need to decide when it's appropriate to follow up with the editor about your query letter.

Don’t leave the editor hanging about what to do next.  Include a call to action.

Asking About Money at the Wrong Time

A big query letter mistake is asking the editor about money before he accepts your story.  Certainly money is important, but your initial query letter is not the time to mention it.

If you do your homework and read the writer’s guidelines, you already have some idea about what the publication pays.  That’s sufficient knowledge until the editor makes the assignment.

--------
I’ve written more than 1000 successful query letters that got the attention of editors.  The ability to write great letters is one of the main reasons why 90% of my queries are accepted for publication.

I’ve studied the art and craft of creating compelling query letters to the point of obsession—I’ve even written a guidebook about them:

Here's a guide that tells you everything you need to know, along with 20 sample query letters that you can use as a template to help you write your own queries.

Other articles that will interest you:

How to Write a Query Letter

The Brighter Side of Rejection Letters

Where Travel Writers Can Get Published

Dreaming Up Story Ideas That Sell