Writing for inflights is regarded as the holy grail for travel writers.  These glossy airline magazines are found in the seat pocket in front of you when you fly domestically or internationally.  Inflights are custom designed magazines, usually published monthly.

When I first started freelancing, I was in awe of my peers who were writing for inflights because these are very prestigious bylines.  I’m still in awe of the writers who consistently get published in these magazines. 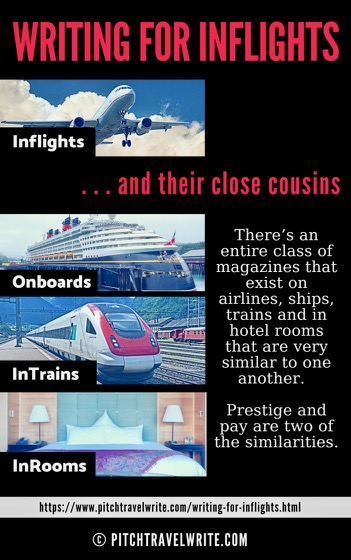 What’s so great about writing for inflights?

Inflights generally pay well.  Sometimes they pay as much as $1/word although the average is closer to 50cents/word.  Smaller airlines may pay significantly less.  A lot of the prestige attached to in-flights comes from their exclusivity.

The second reason writing for inflights make such prized bylines is because they’re widely read. Airline passengers are a captive audience 36,000 feet up in the air!

Finally, writing for inflight magazines gives you a prestigious byline to use in your query letters.  It’s difficult to get your stories into inflights, so being published in these magazines is something to be proud of.

How Many Inflight Magazines Exist?

It’s difficult to be exact about the number of inflights.  Statistics indicate there are somewhere between 250-300 inflight magazines.  Gary McLaren’s comprehensive In-flight Magazines Report lists 250+ magazines.  (For information about this report, see the end of this article.)

According to English freelance writer Mark Andrews, who regularly writes for inflights, the airline list stands at 245 – and most of these have magazines.

He tells me, “Some airlines have more than one magazine. British Airlines, for example, has different magazines for each class of passenger.”

When writing for inflights, your articles need to have an international reach.  Editors prefer a global mix of stories that will appeal to educated, affluent business and leisure travelers.

The following statistics clearly show this:

When writing for inflights, present your perspectives with a sense of political, business, and cultural sophistication.  Editors expect this.  Articles must have good-natured humor (where applicable), be factually correct, practical and well-researched.

Writing for Inflights is Highly Competitive

Because of the prestige and high pay associated with writing for inflights, the competition from your fellow freelancers is fierce.

Most in-flight editors receive an absurdly high number of queries each day.  So they can be very picky about what they choose to publish.

Your queries have to pitch just the right story angle. Several in-flight editors have told me that they constantly reject perfectly good stories because they have so many high quality pitches to choose from.

Mark Andrews adds, “Some editors like to work with a fairly constant stable of writers. It took me years to break in with Blue Wings (Finnair) and you’ll notice that pretty much every edition is written by the same writers.”

But there’s good news about writing for inflights. With 250 in-flights published every month, the editors are constantly looking for stories ranging from 250 words to 3,000 words on almost every conceivable topic.

Given that there is an average of 6 feature articles in each in-flight, and there are 250 of them, this means editors are looking for 1500 articles every month!

Writing for Inflights - What to Pitch

The main rule when querying in-flights is to only pitch travel stories about the destinations on each airline’s routes. i.e. at or near where the airline lands.

For example, my article in Emirates Airline’s Open Skies magazine was about Paris’s Pere Lachaise Cemetery. Paris is one of Emirate’s destinations.

There must be a clear connection between your travel article and the airline’s routes when writing for inflight magazines. When preparing your in-flight magazine distribution list, write down the international and national airlines that service the city or region you’re going to write about.

Harbors magazine is the inflight for a regional fleet of private charter float planes.  They fly to small harbors and lodges around the Pacific Northwest.

My Harbors articles were about Pacific Northwest destinations and accommodations in the region served: Deception Pass (a beautiful bridge over a scenic pass), Port Ludlow, the Deer Harbor Inn, and the George Washington Inn at Port Angeles.

Make every attempt to mine your region for interesting and little-known stories. What’s new, different, and unusual about your region?  Writing for inflights suits freelancers who are knowledgeable about local sights, scenes, and activities.

This is a daunting list!  Writing for inflights is a good fit if you can offer versatile types of stories.  It will speed up your in-flight bylines. The more wide-ranging the topics you pitch, the more work you’ll get.

One common misconception is that you should use front-of-book pieces to break into writing for inflight publications.  Mark Andrews dispels this myth.

“I think this is some of the most misguided advice ever,” says Mark.  “Most front-of-book pieces are written by the editors and staff writers based on press releases. One of the few exceptions," he mentions, "is Hemispheres (United Airlines)."

And, as every editor will tell you, your proposed article idea should have an intriguing hook or a story angle. You should be pitching innovative ideas. If your story fits a particular column in a magazine, suggest which column in your query letter.

Make sure you explain to the editor why you’re the best person to write the story you’re proposing.

Pitch via email. Your query letter should be concise and focused and speak to the magazine’s style and region. This means it is very helpful to read the stories in a few past issues to pick up the magazine’s vibe.

I’ve collected numerous in-flights from my travels, and have also scored a few from friends that have just returned from trips.  Some in-flights have archives online, where you can review past articles. It won’t take long before you get a feel for what the editors look for, and what kinds of stories you can pitch.

If you offer photographs along with your article, make sure they are high quality, in focus, properly exposed and well-composed.  And keep in mind larger publications might hire their own photographer or source the photos themselves.

When pitching in-flights, all other standard freelance travel writing rules of engagement apply. Be sure to read and study the magazine’s Writer's Guidelines (or Submissions Guidelines) if available.

The guidelines explain the types of stories the editors want including their length and style. These guidelines are very helpful when you’re considering what travel stories to pitch.

Mark Andrews shared this insight: “Guidelines for airline mags are even more difficult to get hold of than for regular magazines. They don’t usually have a link on their website. Airlines in the U.S. are better at giving guidelines than elsewhere.”

Some in-flight writer’s guidelines have editorial calendars where they list the themes of upcoming issues, with assigning dates. If you’re pitching a story on an editorial calendar, send your query many months in advance.

Mark Andrews points out, “Lead time for in-flights can be very long. They can also take a really long time to publish after submission. I’ve waited well over a year for some of my articles to be published”.

Don’t be afraid to pitch to non-English in-flights. They invariably publish some English content.

Mark Andrews addresses this with an example. “Even if it’s not in English, they will sometimes take English articles and translate them. I sold an article to a Hong Kong airline who then translated it into Cantonese and published it only in that language. Many magazines are bilingual, and some even trilingual,” he says.

Is writing for inflights just for well-published veteran freelancers? 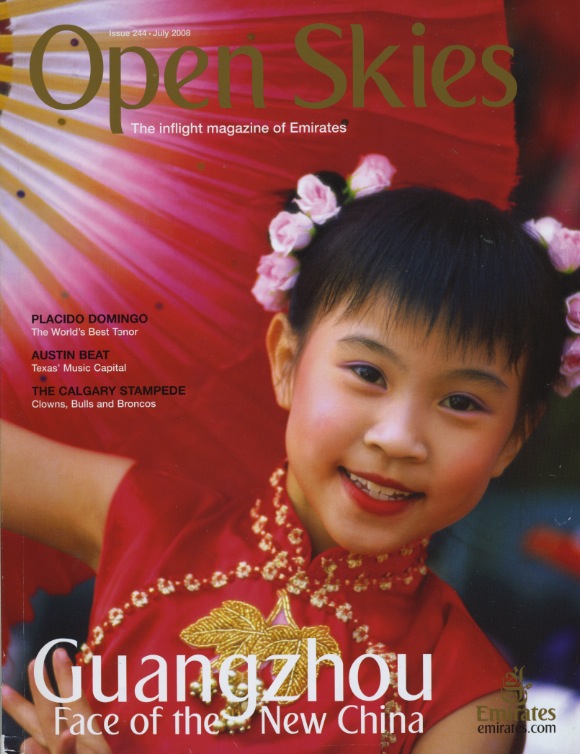 In-flight editors demand a high literary standard. This means they will not hesitate to send submitted articles back to the writers for additional work.

When writing for inflights, word on the street is 80% of articles submitted are sent back for rewrites or tweaking.

Obviously, if your article is sent back for some sort of revision just buckle down, do your rewrite, and get it back to the editor fast.

With these stringent standards, you might think writing for inflights should be left to veteran travel writers.  But in my experience, after only six months of travel writing, my article on the Pere Lachaise Cemetery feature was picked up by Emirates Open Skies magazine.

While inflight editors prefer to work with professional freelancers who have been published in respected national and international magazines, I’d encourage novice travel writers to pitch inflights with unique and enticing story ideas.  Just make sure your queries are well crafted.

Writing for Inflights and their close cousins …

There’s an entire class of magazines that exist on airlines, cruise ships, trains, and in hotel rooms.  These close cousins to inflights are called  Onboards, InTrains, and Hotel InRoom Magazines.  These categories of magazines are very similar to one another, and tend to pay better than most travel magazines.  Writing for any of these is also prestigious.

Onboards are relatively unrecognized publications found in cruise ship cabins. They usually include articles about what to do and see at the cruise line’s ports of call.

The same querying rules apply as with inflights.  You should only pitch stories about places where the cruise ships dock.

My stories in Disney Cruise Line, Holland America (Compass), and Norwegian Cruise Line magazines were all about activities offered in Petersburg and Juneau, Alaska.  Here are a couple of the magazine covers.

These magazines are found in the rooms of the larger international hotel chains. Luxury hotel and resort chains sell copious amounts of advertising in these publications and use them as a profit source.

Hotel magazines are rated highly along with inflight magazines in terms of prestige and pay.  The same freelance rules of engagement apply here.  You should only pitch destination stories for attractions that are nearby the hotels. Most international hotel chains list where their hotels are found around the world.

Intrain publications are another category similar to writing for inflights.  Some airports also have their own publications. Always be on the lookout for these publications when you travel, and add them to your magazine list.

If you’re looking for a comprehensive listing of 250+ in-flight magazines, of more than 230 airlines in 120 countries, the Inflight Magazine Report is a gold mine.

This valuable reference provides direct links to the:

It would take you hundreds of hours to compile this list, and it's likely you’d never come close to compiling a list as comprehensive as this one.

(Full Disclosure:  This is an affiliate link and we will receive a portion of the sales price if you purchase this item.)