Can Print Media
Survive the Internet?

Doomsayers are announcing that print media will soon become a thing of the past.  With the much-publicized closure of a few high-profile print magazines, some will find it easy to believe this bold statement.

Travel bloggers and website publishers will tell anyone within earshot that the Internet has completely overtaken the print industry. One prominent travel blogger even predicted that by the year 2020 print magazines would cease to exist!

Naturally, as a print media freelance writer I'm concerned when I hear these gloomy predictions.

Are these brash statements the gospel truth?  Not according to Linda Thomas Brooks, President and CEO at MPA, the Association of Magazine Media. She says, "The old trope that print is dead is just lazy thinking."

To check the facts, I hunkered down and did some research - lots of research!

I studied the state of the print media industry and the travel print media specifically and spent three long days finding the truth and answering the question:  is print media doomed?

Or, is this simply an exaggeration?

What I found was both enlightening and encouraging! 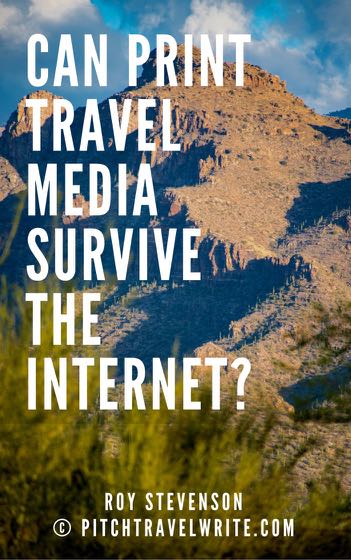 Here's my assessment of the print industry based on current research and my own experiences over the past few years.

First, let’s look at the state of the American print media market. There are 7,293 consumer magazines and periodicals currently on the U.S. market (from MagnetData.net).

The chart below shows the number of U.S. magazines that opened and closed, between 2009-2015 (from MediaFinder.com). 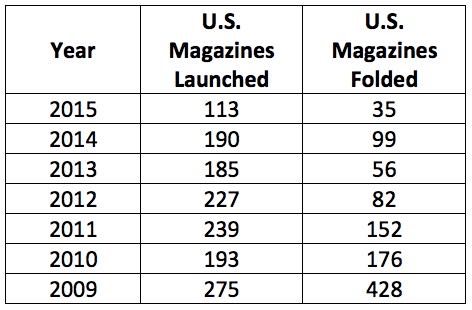 The first thing you notice is that more new magazines launched than folded in the six years from 2009-2015.

There were 191 new magazines, with 18 of them about food. The fastest growing category was special interests.

To re-state this important finding, previously online-only magazines and websites are launching print magazines. Yes, you read that correctly.

Statista mentions two big names as examples, "WebMD began as a website and has now launched a print edition. ESPN The Magazine is a print magazine with the largest online audience in the U.S., followed by WebMD in second."

Did you know Airbnb had a print magazine? We didn't until we saw it on the magazine rack in 2019. Not only was it a full-fledged glossy, it was packed with good, juicy information.

Clearly, magazine publishers don’t believe the era of print media is over. Here are some quotes from industry insiders:

According to Statista.com, "the magazine industry will likely remain stable for years. Magazines remain an important platform for many advertisers." They state that consumer magazine advertising spending reached about $15.6 billion USD in 2019 - proof that print appeals not just to consumers but also with businesses willing to put their money behind it.

"Motorcyclist was ranked as the fastest growing magazine brand in the U.S. in 2018, with Men's Journal, Saveur, and Town & Country also on the fast-growing list." - Statista

"The good news for printed magazines is that their credibility has a halo effect on the magazines' websites, which gives them a competitive advantage over their digital-only competitors. People may be buying fewer magazines, but they still associate them with quality and reliability." - D. Eadward Tree (a pseudonymous magazine-industry insider who has been writing a popular blog, Dead Tree Edition, about the industry since 2008.)

Print has some additional advantages over digital. Terri White, Editor-in-Chief of the film magazine, Empire (Bauer Media Group), makes some interesting points about our perceptions of print vs digital:

"The digital space is a hectic, loud, cluttered landscape with bloggers, influencers, journalists, editors, writers, marketers all shouting into the void - their voices surfacing, or not, depending on SEO or algorithms."

She continues, citing the contrast when readers hold a print magazine in their hands:

"The intimacy is unrivaled . . . there's a visceral, powerful connection . . . in this increasingly digitized world, you cannot underestimate how much people just want to feel something real."

And the number of print magazine readers in the U.S. has had a slight increase since 2012. (Statista.com)

Yes, there have been some losses, but that's always been the case in the print industry (or any other industry.)

Newly launched print magazines, have only a 10%-20% chance of surviving and thriving past their first few years.

This matches well with my personal freelance writing observations and experiences.  Thirty of the 200 print magazines I’ve written for have folded since I began my writing career ten years ago.  That’s a failure rate of 15%.

This startup magazine failure rate makes the 7,293 magazines currently existing in the American market remarkable.  These magazines have survived the test of time, and are obviously still earning a reasonable profit for their publishers.

Print magazine industry experts describe the small decline as normal attrition. And, despite the decline in the U.K., there are still at least 2,800 U.K. magazines making a go of it!  Some of them are even buying my articles! My work has been published in 23 U.K. print magazines, and they generally pay well.

Another interesting note:  Of the 290 U.K. publications that folded between 2011 and 2016, only seven were travel magazines.

Overall, large numbers of print magazines (approx. 9,932) are still being published in the U.K. and the U.S. combined. There are additional magazines in Australia, New Zealand, Singapore and other English-speaking countries.

Clearly, there is no evidence to suggest that print magazines are dying off beyond their normal attrition rate.  And there is promising evidence of print magazine growth.

Related articles that will also interest you:

How to Get Published 90% of the Time and Make Money

Getting Published:  The Many Ways to Sell Your Stories

Do you need help writing query letters that catch the attention of editors?

If you're looking for a guide to help you write query letters to editors, I've written The Complete Guide to Query Letters for Travel Writers to help you.  It includes everything you need to know about query letters, along with 20 sample query letters that you can use as templates for your own queries.