Getting Paid
for Your Travel Stories

After an editor tells you he is interested in your story idea, getting paid is the next thing on your mind.  It’s time to confirm the payment terms.

Three things are important for getting paid:  your deadline, the number of words for the article, and the payment terms.  Payment terms include how much you will be paid, and when you will get paid.

If the writer’s guidelines spell out what the magazine pays, then it’s just a matter of confirming these terms with the editor. 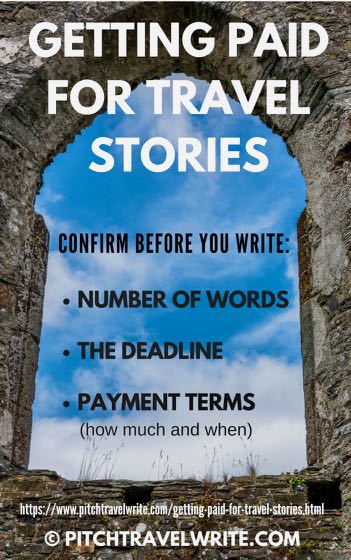 In either case, don’t write the article until the editor has confirmed these terms in writing.  This becomes a legal and binding agreement.

In my early days of travel writing, there were times when I was naïve enough to think that once I submitted an article everything else would fall into place.  Sometimes it did, and sometimes it didn’t.  Don’t leave it up to chance.  Always get written confirmation before you write the article.

There are a few things that indicate problems when you’re in this part of the process.  Watch for these red flags when it comes to getting paid:

Communicating payment terms should be straightforward.  If you encounter a situation that doesn’t seem quite right, or if the editor is avoiding the topic of payment terms, walk away.

Most of the time, things will work out.  So once you’ve got everything confirmed in an email from the editor, and the terms are agreeable to you, then write the article and submit it.  Then - it's time to get paid!

Getting Paid - Submit an Invoice

My business practice is to submit an invoice at the same time as I submit the article.  I always do this to save a step and to make getting paid easy to track.

My recommendation is to send an invoice attachment when you submit your article to the editor.

Here is a simple invoice that you can use if you don’t already have one:

FOR:
<Name of Article> appearing in <month,year> issue of <Name of magazine>.

TOTAL: $ <Amount Due>
DUE:  One month after publication date (or whatever was agreed upon in advance).

Please mail payment to above address.

Thank You
Your Name & Signature

Sometimes They Need a Reminder

In the freelance world, getting paid takes time and publications pay according to different schedules.  The vast majority of magazines pay when the article gets published.  This can be a long wait because of publishing lead times.  Typically you’ll get paid within about 30 days of publication.

What if you don’t receive your money within a reasonable time?  Send a reminder invoice.

I usually send a second invoice (as an email attachment) to the magazine’s editor, publisher, and accounts payable department.  I write “PAST DUE” across the top of the invoice in large, black letters when I haven't been paid in a reasonable amount of time.

When You Still Don't Get Paid

In a previous post I gave you a few insights into the less glamorous side of freelance travel writing.  One unsavory circumstance has to do with deadbeat editors or publishers.  This is the exception not the rule, but you need to be prepared for it.  The longer you’re in the game, the greater your chances of eventually meeting a deadbeat editor or publisher.

But it's usually not a problem.  Getting paid for your travel stories is probably slower than you prefer, but you'll usually get paid.

I’ve written for more than 200 editors of print magazines, e-zines, websites, on-boards, in-flights, trade journals, and specialty magazines, at the regional, national, and international levels.  Only five have made my “Duds and Deadbeats” list for non-payment - that’s 2.5%.

So how do you deal with the duds and deadbeats?

With most magazines it’s the publisher who is welshing on the debt.  The publishers usually control the purse strings.  Many editors have no control over accounts payable.  Therefore, in order to get paid, you need to correspond with the publisher and accounts payable department.  But make sure you copy the editor with all invoices and correspondence so that he/she knows what’s going on.

When I encountered my first non-paying magazine I remember being reluctant to make a fuss about collecting the money legally owed to me. I thought, “If I demand my money, that magazine will never let me write for them again”.  I was so emotionally involved that I wasn’t being rational.

Think about it.  If a magazine doesn’t pay you for your story, or is habitually late with payments, do you really want to write for them again?  Of course not.  So don't worry about making a fuss for money owed to you.

When you aren’t getting paid for your work, the next temptation is to lose your temper and write a nasty letter.  That’s not wise, either.  Don’t waste your energy.  Remove that magazine from your list and move on.  With 17,000 magazines and newspapers in the English-speaking world, the freelance writing market is vast enough to find other, more honest, takers.

After several months of not getting paid, when it’s clear that the magazine is ignoring you, you can take more concrete action.  What’s important is to show the publisher that you are not going away.

Unscrupulous publishers know that many freelance writers are too timid to request their payments.  You need to be the one that takes a stand.  Eventually the publisher will figure out that it’s easier to pay you and get rid of you, than to keep stringing you along.

To get paid, you can send a “collection” letter by email and also by registered mail (request signature confirmation) to the magazine’s editor, publisher and accounts payable department.  Here's a sample:

This email is in reference to payment for my article that has been published in <name of magazine>. This payment is long overdue.

The article payment past due is:
Name of Article
Date of Publication
Length of article
Number of pages
Amount Owed

Despite sending repeated invoices by registered mail and email to you, these invoices have been ignored.  It is clear that your magazine has no intention of paying me what I am legally owed for these articles, and I have been very patient until now.

Unless payment is received immediately, I will be forced to take the following steps:

1. I will report <magazine name> to several freelance writing websites for delinquent payments.  These websites include WritersWeekly.com's Whispers and Warnings Forum section. This is the largest freelance writing e-zine in the world.  In many cases these listings show up near the top of the major search engines when someone is searching for the name of a company.

2. This report will also go out to the National Writers Union and several other freelancer writing watchdog groups.

3. I will report this lack of payment to the Better Business Bureau in <name of state>, where your magazine is registered.

4. I will send a complaint to the Office of the Attorney General of the State of <name of state>.

5. I will hand the invoices over to my attorney to file for these payments in small claims court in the State of <name of state>.

I trust this email will suffice and you will immediately pay what is owed to me.  I expect to receive payment within five business days.  The invoice for the article is attached.

<Your name and signature.>

These letters aren’t fun to write, but it gives the publisher one final chance to clear the matter up.  And, it usually works.

Once I used it when a publisher owed me money for three articles.  I got paid in full within ten days - and one of the payments was more than a year overdue!

If you send this kind of letter, you need to be prepared to pursue all the avenues you mention in your letter.  In most cases, this will clear up the debts.

When you encounter a deadbeat publication, you can:

That’s the A-Z of getting paid for your travel articles.  Most of the time you’ll only need to invoice once and then you’ll get paid.  But at least you’ll know how to follow-up and take a stand when you don’t get paid.